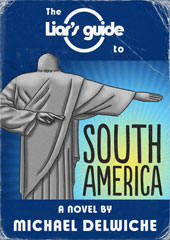 Andrew Mozart is too shy to tell his gorgeous co-worker Sarah how he feels about her. When she leaves for a gap year adventure to South America, he thinks he has missed his chance – until he moves desks and discovers his feelings were mutual. Now Andrew’s on a plane to Brazil on a mission of love with nothing but the address of a guesthouse and his over active imagination to see him through.  Don’t believe a word of it.

Praise for The Liar’s Guide to South America

The Liar’s Guide is now available as an audiobook from itunes, amazon and audible.co.uk

‘This book was “a page turner, unputdownable, partner-ignoringly” BRILLIANT. The author has an amazing talent for allowing me to believe I was travelling in South America. I was repeatedly apologising to fellow tube passengers as I BURST OUT LAUGHING on the commute. I love love loved the book!!! I can’t wait to read another one by the same author he is now up there as ONE OF MY FAVOURITES!  – Janet, Amazon.co.uk

‘This gem of a story is what self-publishing is all about. It’s well written, well structured, clever, and wouldn’t have a snowball’s chance in Hell of being picked up by a mainstream publisher.’ – Pete, Big Al’s Books and Pals

It’s totally insane and kooky. I loved it! THIS WOULD MAKE A GREAT MOVIE – Celia, Goodreads.com

‘What a PHENOMENAL surprise! By the end of the first chapter I was hooked and literally couldn’t put it down. This novel captures that whole scene so perfectly, IT WAS LIKE I WAS LIVING IT. Bravo to this extremely talented new author!’ – J.D.Rachel, author of 12.12.12

The Liar’s Guide to South America hooked me immediately. What impressed me is that a DEEPER MESSAGE lies beneath a seemingly lighthearted romp. The book addresses lying … or should I say lack of honesty. And, as the novel progresses, it turns out that Andrew isn’t the only character in this book that’s hiding something. – Susan Paulson Clarke, author of The Relationship Shoppe

I finished it in a few days… I SIMPLY COULDN’T PUT IT DOWN. I could see a lot of myself in Mozart and I could really identify with the nervousness about girls and travelling… but of course with a streak of adventure. As I followed him around the world, I found myself thinking of what big gestures I could make to the girl of my dreams! What a hopeless romantic. FOR A DEBUT NOVEL, THIS IS SPECTACULAR. Very well written and with a story line that keeps you hooked all the way through. Well done. Can’t wait for the follow up. – St Nick, Amazon.co.uk
The Liar’s Guide to South America by Michael Delwiche takes you on a trip. Juxtaposed against the easily recognizable format of the traveller’s bible (The Lonely Planet), Mozart’s adventures are a tale of lying to oneself and, perhaps, discovering what he is actually looking for. The landscape of South America makes the story come alive. As an avid traveller who has been to many of the places Delwiche includes in his tale, I WAS IMMEDIATELY ENGULFED in The Liar’s Guide. Delwiche takes what could be just another travel novel about a young man finding himself and makes it a humorous tale that any reader will enjoy, perhaps finding themselves somewhere among the pages. Alana Tyler, The Indie Travel Podcast